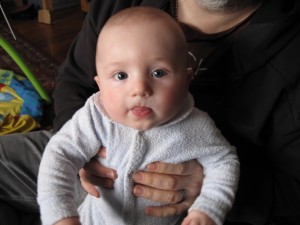 Our “little” baby is already half a year old. He’s on track to be triple his birth weight soon, and is 15 centimetres longer than when he was born. And yet this is apparently typical of babies – he’s bang on the fiftieth percentile for growth and weight. There must be some really big babies out there if he’s average!

It amazes me because he plays on the floor in the exact spot where D was kneeling whilst in labour with him. He was inside just six months ago, now he’s a little person holding things with his hands, eating solid food and growing.

If you looked at two pictures of me taken six months apart, there’s be no difference. I’d probably be wearing the same tshirt, might have gotten some new glasses. But I haven’t done any actual growing since about 1990. Whereas Pip… Well, the pictures don’t do it justice, although you can see how his little face has filled out.

Pip with his first outfit

He fitted into that outfit in his first few weeks.

I’m still amazed that he exists. Almost every day I exclaim “Look, we made a person!” to D, who has taken to just rolling her eyes when I do. We did make him, although it was D that did most of the work, there in her belly. And now we get to bring him up, which I’m looking forward to.