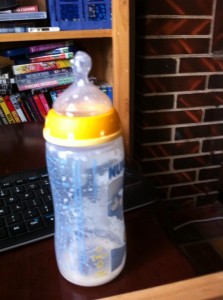 This is Pip’s first-ever bottle of formula. Which I fed him when he was nine months and one week old. For more than nine months the only thing he drank, aside from water with his solids, was breast milk. His mummy is a breastfeeding goddess!

One learns a lot of new terms when you have a baby turn up in your life. “Let down” describes how well milk comes from a mother’s breasts, as does “flow”. Pip’s mummy has an epic letdown and a flow like a garden hose. When Pip was two days old we popped back into the hospital to get some instructions on breast feeding. While there, Mummy expressed about 30 milliliters of colostrum. This we’re told is a lot of colostrum, it was certainly the envy of every other mother we told about it.

In his first few weeks, Pip had quite a lot of gas, partly because he was being inundated with breast milk. The poor fellow was swallowing as best he could, but getting lots of air at the same time. There was lots of burping and barfing. But he thrived – in nine months he’s more than tripled his birth weight.

Early on D started expressing with the Vuvuzela, as we call our breast pump. We fed Pip this milk when he was out with people or later at child care. And… well, look what happened: 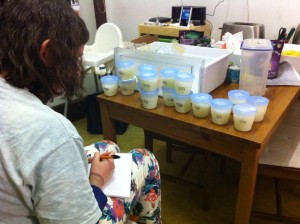 This is about half the breast milk we had in the freezer. Ten minutes on the breast pump, and D produced 120 mls of milk. Her body was just very very ready to be a mummy, very ready to supply our hungry little fellow.

And now, much to our sadness, we have to start weening him, for reasons I’d rather not go into. The taps are going to have to be slowly turned off on D’s chest. Currently he has one bottle of formula a day, soon it’ll be two, and so on till that’s the only milk that he gets. D is quite sad. Breast feeding is such an intimate thing, such a bond between a mother and child. Still, we’re doing way better than average. In this country most babies are not breastfed beyond six months. I can understand why – it can be hard work, not all mothers have an amazing supply like D, and things like work interferes with it. Which is a pity, it’s clearly very good for the baby. So D has done a marvelous job of providing for our fat little imp.

And sadly sometimes it seems that Pip prefers the formula to the breast. One night recently he pushed away and fussed until we gave him a bottle. D was non-plussed, despite my protestations that she is in fact a very good mummy.

One day soon, hopefully a couple of months from now, Pip will have his last breast feed. There may well be tears, but D has done a fantastic job. So three cheers for Pip’s mummy, Breastfeeding Goddess!